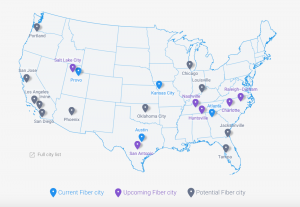 Google is due to roll out its Google Fiber broadband initiative to Huntsville, Alabama using part of the fibre network being built by local gas, water and electricity supplier Huntsville Utilities.

Google said that to date it had built the majority of its Google Fibre networks from scratch, but that “every city is unique” and that it is working with the municipal-owned network to bring its high speed service to Huntsville.

“In 2014, Huntsville’s leaders shared their vision for a community energised by superfast speeds — and they decided to build a network that could support an electrical smart grid and other municipal needs, plus provide the best of the web for local families, entrepreneurs, businesses and academics alike,” said Jill Szuchmacher, director, Google Fiber Expansion.

“To help achieve this goal, the city asked to hear from fibre providers who might be interested in working together. So we got in touch.”

Huntsville Utilities will now design and construct its network – pending final approvals. Once it is built, Google Fiber, and any other broadband provider, will be able to bring high speed internet services to the city.