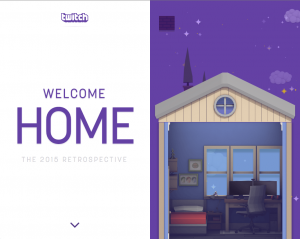 Videogame enthusiasts watched 459,366 years worth of video on Twitch in 2015, according to the games-focused video platform and community.

In a 2015 retrospective, Twitch said that an average of 1.7 million broadcasters streamed content on the service every month, and that an average 550,000 concurrent viewers tuned in. Per viewer, Twitch users watched 421.6 minutes of content per month.

November was the service’s most active month for broadcasting with 35,610 peak concurrent broadcasters using Twitch.

Throughout the year, League of Legends, Counter Strike and Dota 2 were the most-watched games.

“The global growth of the Twitch platform continued in 2015. Twitch is now available in more countries than ever before, and even has dedicated viewers in places as remote as Antarctica,” said Twitch.

In Europe, the countries that had the highest Twitch viewership were the UK, France, Germany, Poland, Sweden and Russia.

Amazon agreed to buy Twitch for US$970 million in cash in August 2014. Meanwhile, YouTube launched a new app and website dedicated to video game-related content last June, in an apparent effort to take on Twitch.