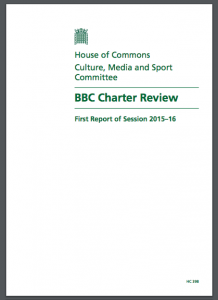 The BBC’s governing body, the BBC Trust, has “lost confidence and credibility and should be abolished,” according to the Culture, Media and Sport Committee’s report on the BBC Charter review.

Published today, the report claims that while the BBC is an “extraordinary national and global institution” it needs a “radical overhaul of its governance arrangements.”

The report argued that BBC director general Tony Hall is “effectively accountable to no one” but also lacks the support for difficult editorial decisions or to drive change through the organisation.

Among the findings and recommendations was the need for the BBC’s Board to be reformed as “a unitary board” and strengthened, with the addition of an independent chairman.

This redefined board should then “re-examine the business case” for the BBC’s commercial arm, BBC Worldwide. If the board decides to retain the wholly-owned subsidiary model, it should be subjected to “greater transparency and accountability and kept under kept under review by Ofcom”, according to the report.

It also called for a new complaints procedure that would see all complaints handled initially by the BBC itself, with both industry and editorial issues then escalated to UK broadcast regulator Ofcom.

“Based on more than six months of evidence and testimony, we believe the [BBC’s] current structure, including the BBC Trust, needs to be abolished. In or judgement the key functions can and should be absorbed within Ofcom, the industry regulator, with suitable changes,” said chair of the committee, Jesse Norman MP.

“Within the BBC, the director general should be made accountable to a new unitary board, with a chair of the board able to offer guidance and support in driving change, streamlining the organisation and cutting costs. And the new board needs to address a culture within the BBC that has been widely described as bureaucratic, arrogant and introspective.”

A spokesperson for the BBC Trust said: “We welcome the committee’s endorsement of the Trust’s proposals in 2015 for substantial reform of the BBC’s governance – including the creation of a unitary board and strong independent regulation, specific to the BBC.”

UPDATE: A spokesperson for the BBC said: “This report is an important contribution to the debate on the future of the BBC. We support the committee’s assertion that the BBC’s independence should be protected by taking the BBC out of the political cycle, and agree with its proposal for an eleven or twelve year charter.

“Like the committee, we think the BBC should be externally regulated – we believe that a unitary board would be good for the BBC and strengthen accountability. We also welcome the committee’s support on the BBC’s record on producing distinctive programmes which we know that the public love, and its recognition of the BBC’s value to the UK and around the world.”