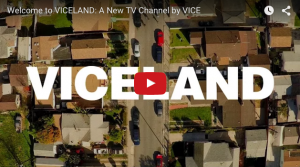 Jonze and Moretti will oversee all content that goes on Viceland – including primetime programming, acquisitions and interstitials – and will also be responsible for the development of the overall Viceland brand identity.

Slattery will be responsible for daily operations, including oversight of scheduling, marketing, research, revenue. He will also manage the production and development units with head of production Derek Freda.

“It’s a pretty crazy moment for us that someone’s giving us a TV channel. We’re trying to make the whole thing just be driven by creativity and making something that feels personal. And the exciting thing about my job is handing over this channel to artists and filmmakers who inspire us, both here inside Vice and in the outside world,” said Jonze.

Jonze is an Academy Award-winning filmmaker, responsible for films including Her, Where the Wild Things Are and Adaptation. He has been Vice’s creative director since 2006, when he joined to help create the online video and documentary division.

Slattery joins Viceland from A+E Networks, where he was executive vice president of marketing for A&E, History, and H2 Networks.

A+E Networks and Vice Media confirmed reports that the pair will launch a Vice-branded channel as a joint venture in November. The new 24-hour youth-oriented channel will replace A+E Networks’ existing H2 service and will be available in about 70 million homes at launch.