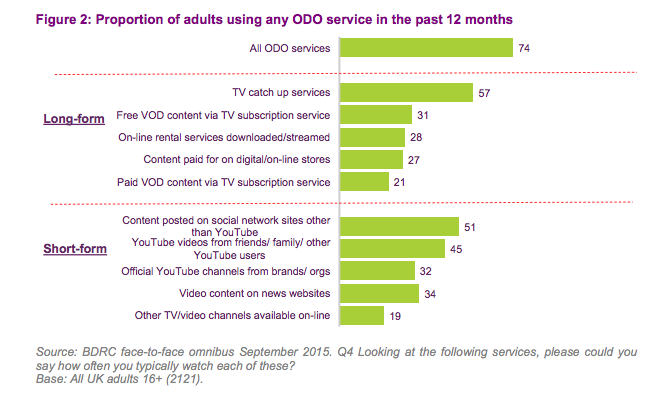 Three quarters of UK adults have viewed an online video-on-demand service in the last 12 months, with catch-up TV being the most popular category, according to research by Ofcom.

According to the regulator’s On-demand and Online Research: Consumption and Concerns report, 74% of adults accessed an online service, up from 71% last year, with 96% of 16-24 year-olds accessing such a service, a proportion that falls to 35% in the over-65 age group. The majority of the latter group – 80% – that use online on-demand services view catch-up TV, with 24% using free on-demand services offered by TV subscription services.

TV catch-up services are watched by 57% of all UK adults. Short-form content posted on social networking sites is watched by 51% and YouTube by 45%, making these next most commonly-viewed types of content.

Social networking-based video is viewed more frequently, however. Thirty per cent of on-demand users claim to look at content on social networking sites every day, while 57% do so at least once a week. This compares with 52% who watch catch-up TV with the same frequency.

According to Ofcom, 28% of teenagers who viewed online on-demand video expressed concern about what they had seen online, up from16% in 2014. The proportion of UK adults expressing concern about something they have seenon such a service has remained stable at 12%. Among the younger age group, bullying or victimization is a key concern, followed by bad language, violence and cruelty to animals.

Ofcom is now wholly responsible for the regulation of ‘TV like’ on-demand services in the UK, following its decision last year to take over the responsibilities of co-regulator ATVOD.