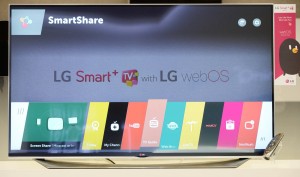 By 2019 more than 50% of TV households in the United Kingdom, France, Germany, the US and Japan will have smart TVs, according to IHS.

The research firm said that smart TV adoption has improved in China and many developed regions as consumers increasingly seek streamed content from online video services.

In Western Europe, Germany and the UK are expected to reach 53% penetration for smart TVs in 2019, followed closely by France at 50%, according to IHS.

It said that smart TV household penetration in Japan has already reached 50% and will rise to 63% in 2019, followed by the United States at 57%.

“Growing availability of 4K content from online video providers will also support this trend, as will the introduction of ultra-high-definition Blu-ray in 2016.”

IHS said it expects smart TV household penetration in China to reach 46% by 2019 – higher than other emerging regions as many Chinese consumers seek out online content services.

Elswhere the research claims that smart TV household penetration in Brazil and Russia will reach 36% in 2019 and just 3 percent in India.