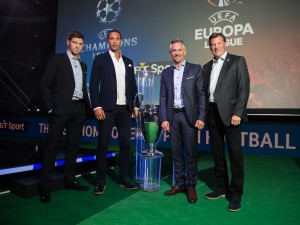 BT added 97,000 TV customers in its fiscal third quarter, taking its total to 1.4 million. The company said that viewership of its BT Sport offering had increased by 46% thanks in part to coverage of Champions League and Europa League football.

BT said that 20 football matches recorded peak concurrent viewing above one million viewers between August and the end of the year, compared with only 12 for the previous season.  The majority of both consumer and commercial BT Sport customers take the full range of the company’s sports channels, according to BT.

BT also saw a strong boost to its mobile numbers, with 300,000 new mobile customers added in the quarter. Overall, the telco added 6,000 customers, the first growth in its consumer base in over 10 years, compared with a decline of 60,000 for the same period last year.

BT Consumer posted a revenue increase of 11% to £1.2 billion (€1.6 billion) for the quarter, including a 23% increase in broadband and TV revenue. Operating costs increased by 12% thanks to BT’s investment in rights for BT Sport Europe. However consumer division EBITDA grew by 8% to £250 million.

“BT Consumer had a standout quarter, increasing its overall line base for the first time in well over a decade and capturing 71% of new broadband customers.  Good customer growth in broadband, TV and mobile helped to grow ARPU by 7%.  Customers like what we’re offering, whether that’s superfast broadband, Champions League football or mobile data bundles.  BT Global Services also did well with good revenue growth in continental Europe and Asia,” said CEO Gavin Patterson.

BT took the opportunity to defend the record of Openreach, its infrastructure arm now subject to numerous calls from rivals to be subject to a forced sale. The telco said that the growth of broadband usage during the period of Openreach’s existence had been explosive, and that the group had now deployed fibre to over 24 million premises from a standing start in 2009, including 500,000 homes passed in the third quarter.

BT itself added 250,000 fibre customers in the quarter, taking its retail base to 3.7 million, with 46% of the company’s broadband customers now on fibre.

“Fibre is underpinning the growth at Openreach with almost half a million premises taking up the service this quarter via dozens of service providers.  The fibre market is highly competitive and growing all the time, which is great news for the UK economy.   Our superfast fibre broadband network is available to well over 24m homes and businesses.  We will help take fibre coverage to 95% of the country by the end of 2017, with plans to go even further.  Our G.fast trials are progressing well.  The UK is poised to take the important journey from superfast to ultrafast broadband and BT is well placed to lead the charge,” said Patterson.

The results came as BT completed the acquisition of EE, bringing Deutsche Telekom on board as a shareholder, and announced a new operational structure with EE retaining its brand in a separate division under Marc Allera.