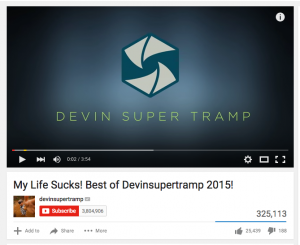 A pair of YouTube content creators have clashed after one removed another’s popular video without warning due to a trademark infringement.

MCN Jukin Media moved to take down an original video posted by Devin Graham to his DevinSuperTramp channel, which is part of the Fullscreen MCN.

The video, which featured original DevinSuperTramp content, was titled People Are Awesome 2015 – ULTIMATE DevinSuperTramp Edition in 4K, which quickly became Graham’s most watched, according a blog post he wrote this week.

Jukin owns the copyright to the People Are Awesome brand, and said in a Twitter message to Graham that it had removed the video after Fullscreen had notified it of the breach.

It had acted because other channels had in the past used the People Are Awesome brand name in “stolen” videos to make them “sound legitimate”.

Trademarking the phrase gives Jukin the power to take down content that potentially infringes its rights.

Jukin, which operates channels such as Fail Army and Pet Collective TV, said Graham would be familiar with YouTube rights issues as both companies had featured in a Digiday article on the subject in the past.

Graham wrote that he and his channel “had no way of defending ourselves” against the move, as the option to change a video’s title, which is usually offered to content creators, had been locked over the trademark challenge.

He claimed Jukin’s legal team had eventually removed the copyright strike a week later, but that reposting the video under a different title was largely irrelevant as it would have lost “all he momentum we had worked so hard with”. The video is now online as My Life Sucks – Devinsupertramp Edition.

Graham also claimed Jukin and other YouTube channels had used his content without clearing rights in the past “yet they never had a problem with taking down a video on our channel because of a title we had used”.

Jukin’s statement expressed regret over the events while explaining its position. “In the case of your video, it’s our regret that we issued a strike without first asking you to change the name,” the firm wrote.

“It’s never our intention to stifle anyone’s channel, merely we try to protect the integrity of our brand. We should have gotten in touch with you first to discuss the matter. For that, we sincerely apologise.”