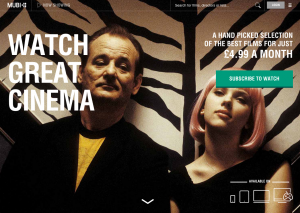 Asian entertainment company Huanxi has invested US$50 million (€45 million) in arthouse film service Mubi with a view to launching the video-on-demand offering in China.

The pair will form a joint venture to launch Mubi China later this year.

Huanxi will invest US$40 million in Mubi China and take a 70% stake in the business.

The remaining US$10 million will be invested in Mubi directly and will see Huanxi take an 8% stake of the curated SVoD service – an investment that values Mubi at US$125 million.

“As China’s movie market grows rapidly, the online video and movie sector is also expanding quickly. As a result, there is a growing demand by Chinese audiences for quality content online,” said executive director of Huanxi, Dong Ping.

Mubi China will offer subscribers a new film every day, with each title available to watch for 30 days – the same model that Mubi uses in its other international markets.

Commenting on the Mubi China launch, Mubi CEO and founder Efe Cakarel said through the partnership with Huanxi, it will “introduce a curated film offering in the country with the largest population in the world – and soon the largest film market in the world.”

The news comes a week after Netflix launched in 130 new countries, extending its worldwide footprint to 190 countries – though not China, where Netflix said it continues to “explore options”.

Announcing the expansion at the Consumer Electronics show in Las Vegas, Netflix CEO Reed Hastings said: “the Netflix service has gone live in nearly every country of the world but China, where we hope to also be in the future.”