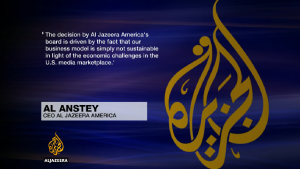 Al Jazeera America will close its cable and digital operations in the coming months, citing an unsustainable business model.

Announcing the decision yesterday, Al Jazeera America CEO Al Anstey said that the US network would cease operating by April 30 – less than three years after its launch.

In an email to all employees, Anstey paid tribute to Al Jazeera America’s staff, but said: “our business model is simply not sustainable in light of the economic challenges in the US media marketplace.”

At the same time, parent company Al Jazeera Media Network revealed plans to expand its global digital operations into the US so that it can better compete in an “overwhelmingly digital world” and serve “today’s 24-hour digitally focused audience”.

Al Jazeera said in a statement that it will expand its existing international digital services to broaden its presence in the US, building on existing services like youth-focused mobile news service AJ+.

“As audiences increasingly turn to multiple platforms, including mobile devices, for news and information, this expansion will allow US and non-US consumers alike to access the network’s journalism and content wherever and whenever they want,” said Al Jazeera Media Network.

Al Jazeera started life in 1996 as an independent Arab news channel. It has since expanded with new channels and services and claims to now have more than 70 bureaus around the world.

Al Jazeera America went live in 2013 in an effort to compete with US news networks like CNN and Fox News. The channel is headquartered in New York City and has operations in 12 cities across the US.