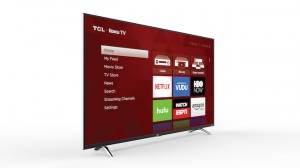 The first 4K UHD Roku TVs will be available to buy this spring, with the company’s TV manufacturing partners expected to introduce nearly 60 Roku TV models in total this year.

The streaming device maker said that in the US Roku-powered TVs now account for 8% of smart TV market share, and that 1 million Roku TVs were in consumers’ homes by the end of 2015.

Unveiling plans for “continued Roku TV expansion in 2016”, the company said that the first Roku TVs are expected to be available in shops in Mexico in the first half of this year.

“We’re very pleased with the success of Roku TV since the launch of our licensing program in 2014. Consumer response and engagement has been tremendous, and our TV partners have secured great retail placement and stellar product reviews that have led to strong sales results,” said Chas Smith, general manager of OEM for Roku.

“We expect momentum for Roku TV to accelerate as we continue efforts to add new TV partners while expanding our work with existing partners to bring many more Roku TV models to the US, Canada and soon Mexico.”

TCL is the first Roku TV partner to announce a 4K UHD Roku TV, with multiple TCL models due to launch in spring.  Roku said that 4K UHD TVs from additional TV partners are expected to be available this year.

Roku first unveiled its Roku TV smart TV platform at the Consumer Electronics Show in Las Vegas in 2014. Roku TV models, including the new 4K UHD TCL Roku TV, will be on display at this year’s CES.