Pay DTT to challenge satellite in Africa by 2021 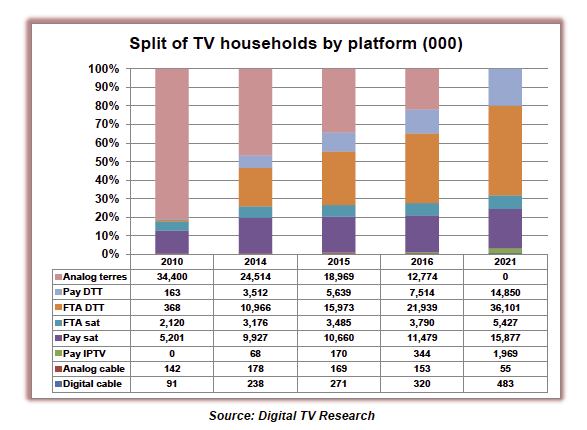 Digital terrestrial television (DTT), and pay DTT in particular, made “huge gains” in Sub-Saharan Africa in 2015 and will challenge satellite as the top pay TV platform by 2021, according to new research.

The research claimed that pay satellite TV subscribers climbed by a relatively low 7.4% in 2015 – partly because of more platform choice created by DTT and partly due to “economic woes” in some countries.

Digital TV Research said that 36.2 million Sub-Saharan African TV homes took digital signals by the end of 2015, up from 7.9 million in 2010.

While “most countries” on the continent missed the ITU’s analogue switch-off deadline of June 2015, complete digital transition was achieved in Gabon, Kenya, Malawi, Rwanda, Tanzania and Uganda by the end of last year.