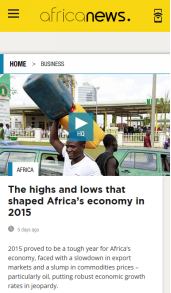 The channel, which Euronews has hailed as the first pan-African news media service, will be available in French and English on all digital platforms. The service will initially be available via its website, YouTube, Facebook and Twitter, and via a new interactive app called Story Hunters.

The channel is designed to provide news on Africa and the rest of the world from an African perspective. The service employs 85 people at offices in Pointe Noire, Congo-Brazzaville’s second-largest city. The channel’s editorial management team comprises Mame Campbell Touré, bureau chief, Isaac Khaguli Esipisu, editor in chief, and François Chignac, director of editorial development. Africanews also makes use of a network of correspondents around the continent.

Euronews said that the channel would start broadcasting on major distribution networks within the next few weeks.

“This is a milestone in the history of our Group. It all began with the recognition that the rising African continent is an incredible source of news and that there is a great pool of talent that lacks a quality media environment,” said Michael Peters, CEO of Euronews and Africanews.

“I want to thank all of the people at Africanews and Euronews who have been working together for months to prepare the launch of this new media whose mission is to ensure the independence and diversity of the news, as a founding principle of Africanews. Africanews is the first organisation to provide news from a pan-African point of view and it will spotlight all the talents of Africa.”