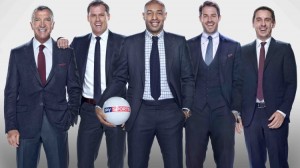 As part of its newly announced schedule of matches, Sky Sports will show more games featuring 14 different teams including Manchester United’s visit to Stamford Bridge, and Manchester City at home to Tottenham Hotspur.

“Sky Sports is the only place to see all the stories of an increasingly unpredictable Premier League season, with drama every weekend. By March there will still be 38 Premier League games to come on Sky Sports, and we will be the place to see the thrilling climax to a fantastic season,” said Sky Sports head of football Gary Hughes.

BT’s February coverage will kick off  with West Ham United versus Aston Villa.Coverage will also include all of the Champions League and Europa League round of 16 and round of 32 games respectively.

Simon Green, head of BT Sport, said: “February is set to be one of our best months ever with an action packed football schedule on BT Sport. There are teams hoping to fight it out for the Premier League title, European qualification or involved in the battle against relegation. BT Sport will also be showing live FA Cup games as well as UEFA Champions League and Europa League games in a February football feast.”