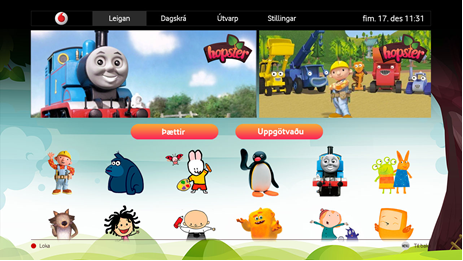 Hopster is now available in all three Vodafone Play packages across Iceland – Vodafone Play, Vodafone Play M and Vodafone Play L – and will bring hundreds of local-language episodes of its shows to kids in the country, including Thomas & Friends, Pingu and Bob the Builder.

Hopster said it has also been working on the localisation of other shows, including Max & Ruby, Wanda and the Alien, Peg + Cat, which will also be premiering on the Vodafone Play subscription service.

An accompanying Icelandic-language mobile app that will include Hopster’s suite of educational games and interactive interface is currently in the works and will be launching in Iceland early 2016.

Nick Walters, founder and CEO at Hopster says: “We’re really excited to be working with Vodafone Iceland. Their approach ties in nicely with what we believe in at Hopster, which is helping kids to learn through the shows they love, in a safe and ad-free environment that’s built just for them. We look forward to introducing Hopster to children and parents across Iceland, and feel it’s important they enjoy the app to the fullest without any language barriers.”

Björn Víglundsson, COO at Vodafone Iceland adds: “We are thrilled with the agreement with Hopster and very excited to offer our customers this great kids TV and learning VoD platform,  something we are confident that will be very well received in Iceland. We couldn‘t be happier to be able to include Hopster in our TV offerings and look forward to the partnership. The Play-to-Learn approach of the content included is of great importance and goes well with our approach of products for the younger generation growing up.”