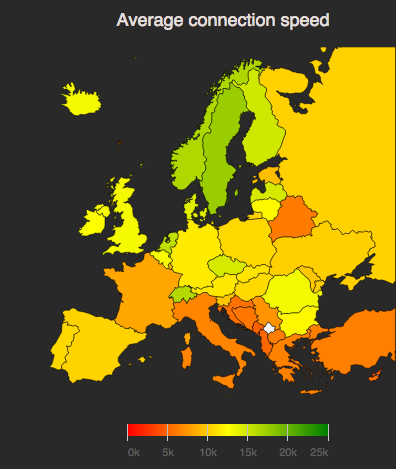 Around 15% of unique global IP addresses received 4K video-capable internet speeds in the third quarter, according to Akamai’s Q3 State of the Internet report, rising to one in five across 12 European countries.

Some 15% of the unique global IP addresses connected to Akamai at average ‘4K-ready’ connection speeds of 15Mbps or above, up 5.3% from the second quarter. Year-over-year, the global 15Mbps adoption rate grew by 21%, with seven of the top 10 countries or regions seeing gains ranging from 8.9% in Latvia with 31% adoption to 73% in Norway with 37% adoption.

The third quarter saw a total of 12 European countries with at least one-in-five IP addresses connecting to Akamai at speeds above 15Mbps in the third quarter. Year-over-year changes were positive for all European countries surveyed. Spain and Germany saw 15Mbps adoption rates more than double, posting gains of 111% and 104% respectively, while an additional seven countries saw yearly growth rates of more than 50%: Norway, Denmark, Portugal, Hungary, Poland, France and Italy.

Portugal led the world in 25Mbps or above ultra high-speed internet take-up growth in the third quarter of this year, with a 203% increase in take up of services offering over 25Mbps, thanks to the rollout of FTTH services. While Portugal’s growth still left only 5.2% of unique IP addresses in the country with 25Mbps or above, Europe, along with table leader South Korea, dominated Akamai’s broadband connectivity top table.

Almost one in four South Korean IP addresses now receive 25Mbps or above, while adoption in Sweden grew by 26% quarter-on-quarter to reach 19%.

The global percentage of unique IP addresses connecting to Akamai that met the 4Mbps broadband speed threshold increased by 2.7% to 65% in the quarter. In Europe, a total of nine countries enjoyed 4Mbps adoption rates of 90% or above: the Netherlands, with 95% adoption, Denmark and Romania with 94% each, Switzerland with 93%, Sweden with 92%, Belgium and Finland with 91% each, and Austria and Hungary with 90% each.

Global average internet connection speeds reached 5.1Mbps in the third quarter, up only 0.2% on the second quarter but up 14% year-on-year.

South Korea had the top average connection speed at 20.5 Mbps, followed by Sweden with 17.4 Mbps, Norway with 16.4 Mbps and Switzerland with 16.2 Mbps.

All European countries surveyed experienced a quarterly increase in average connection speeds, with double-digit gains being posted by Norway – 15% – and the UK – 10%.