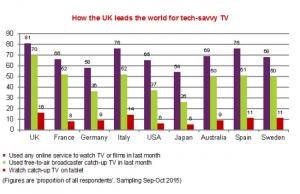 Some 70% of UK adults will watch TV using free-to-air, catch-up services like the BBC iPlayer in December, more than in any other European country, according to Ofcom.

The UK broadcast regulator’s research claims that UK viewers are now using TV gadgets “more than any other major country” and that catch-up viewing is ahead of “all other major European countries and the USA, Japan and Australia.”

“TV viewers in the UK appear to be the most technologically-advanced of European nations, as the growing trend for time-shifted viewing offers an end to the traditional battle for the remote control this Christmas,” said Ofcom.

Based on a sample gathered in September and October, 81% of online adults in the UK used an online service to watch TV or films in the past month, 70% used free broadcaster-offered catch-up services like the ITV Hub, All 4 or the iPlayer to watch TV, while 16% watched catch-up TV on a tablet.

Ofcom also said that the UK a leader for viewing on connected TVs, with 42% of homes owning a TV connected to the internet – higher than any country sampled except Spain.

“Families gathering round for a film this Christmas are increasingly likely to turn to catch-up services like All 4 or Sky-on-Demand. Seven in ten owners of the UK’s connected TV owners are watching such content, while more than half (54%) are watching content via a subscription service such as Netflix or Amazon Instant Video,” said Ofcom.

However, despite these trends, Ofcom added that “traditional live TV remains the most popular way of tuning in” with people in the UK watching an average 3 hours 40 minutes of TV per day.