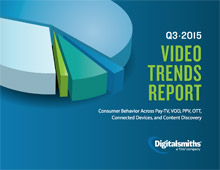 Pay TV use is decreasing slowly but surely in the US, according to Digitalsmiths’ latest quarterly analysis of TV consumer habits.

According to the company’s Q3 2015 Video Trends report, of those US and Canadian TV viewers that did not have a cable or satellite pay TV service in the last 12 months, 19.3% had cut the cord in that period, while 42.1% had cut it previously and 38.6% had never had a pay TV service. Use of over-the-air TV also seems to be growing in this group, with 45.1% of non-pay TV users accessing TV via antennas, up 11.8% year-on-year.

On the bright side, Digitalsmiths found that just under half of the 46.5% considering a change would stay with their existing provider if it released new functionality that make it easier to find something to watch.

Digitalsmiths found that three in five pay TV respondents spent over US$100 a month on pay TV in Q3, up 3.3% over two years, with 23.9% spending over US$151 a month. Of those who reduced their spend, a considerable proportion dropped premium services.

About 24% of pay TV customers said they were unsatisfied with their service, up 2.5% over two years.

Some 76.7% said they would like the ability to pay for only those channels they watch on an à la carte basis, slightly down on the previous quarter.