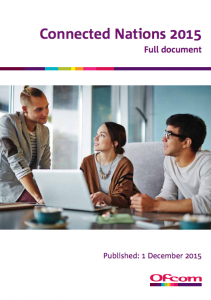 The number of UK homes with no conventional TV but with a broadband connection trebled between 2009 and 2014, according to Ofcom.

In its ‘Connected Nations 2015’ report, the UK broadcast regulator said that, according to BARB figures, there are 1.1 million homes with broadband but without a TV set, representing 4.3% of all households.

“In last year’s Infrastructure Report we noted that the number of homes with at least one TV was slowly declining. This trend has continued,” said Ofcom.

“Younger households are less likely to have a TV set. However, as the total number of these households is growing slowly, and many younger viewers may acquire a TV set as they grow older, it is likely that conventional TV platforms, and their underlying infrastructure, will continue to be important to consumers for many years to come,” said Ofcom.

It noted that that while linear TV consumption remains strong and is still “the most important way of watching TV”, the way people watch TV is continuing to evolve.

In the past 12 months Ofcom highlighted the launch of a number of innovative devices and services, including the Freeview Play and Sky Q platforms, which illustrate “the increasing integration of free-to-air and pay broadcast TV platforms with the internet”.

At the same time, internet-based TV services like Netflix, Amazon Prime and Apple TV are providing access to a greater variety of content across various devices.

The report claimed that the growth of web-delivered TV is having “major implications” for infrastructure providers, with the proportion of video traffic delivered over fixed broadband networks rising to 65% this year.

The regulator said that video carried over fixed and mobile networks is increasing, with the amount of video delivered over fixed broadband climbing from 48% in 2014.

“Video carried over fixed and mobile networks is growing rapidly, and networks need to invest in providing more capacity for it,” said Ofcom.

“The growing use of new broadcast technologies is changing the way in which consumers watch TV. More content is being viewed over the internet than ever before, but most viewing continues to be to linear broadcast TV.”