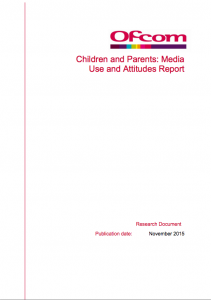 This year for the first time, children aged 12-15 who watch both television and YouTube clips stated a preference for YouTube, according to new research by Ofcom.

The UK broadcast regulator’s ‘Children and Parents: Media Use and Attitudes Report’ found that 29% of children in this age group who watch both types of content said they prefer YouTube, compared to 25% who opted for television – 45% said they liked them both the same, while the remainder said they didn’t know.

The results mark a shift from 2014, when 30% of the 12-15 year-olds said they preferred TV versus 25% who liked watching YouTube more, with Ofcom noting that YouTube in particular is becoming “an increasingly important alternative to traditional TV”.

“The content children are consuming is increasingly curated by digital intermediaries, including providers like YouTube and Google,” said Ofcom in its summary of the key themes of the report.

“As well as attractive sources of content, rivalling traditional broadcasters, they are also seen by some children as legitimating brands, helping to vouchsafe the veracity or trustworthiness of content accessed through their sites,”

Ofcom found that while the BBC remains the preferred source of “true and accurate information about things that are going on in the world” among 12-15 year-olds (52%), there has been an increase in the numbers of children this age saying they would turn to YouTube for this information – 8% compared to 3% in 2014.

Some 52% of those who watched YouTube knew that it is funded by paid advertising from companies, a proportion that is unchanged compared to 2014.   Meanwhile, 47% of 12-15 year-olds who go online were aware that vloggers might be being paid by the company to say favourable things.