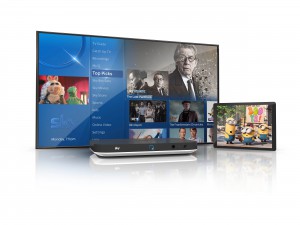 With Sky Q, the UK pay TV operator will introduce an additional family of products, designed to work together to offer “fluid viewing” across screens and smart devices.

The new Sky Q box – which also comes in a ‘Silver’ version – features up to 12 tuners, 12TB of storage and lets viewers record up to four live shows while watching a fifth.

An accompanying Sky Q Mini box lets users wirelessly access Sky Q in other rooms of the home – without needing to be connected to the main dish. Meanwhile a new Sky Q app lets users watch live, on-demand and recorded content from a tablet.

Speaking at the Sky Q launch event in London this morning, Sky CEO Jeremy Darroch said that Sky Q will be available in the UK and Ireland from early 2016. He described the launch as “the start of a journey” with voice search, smartphone compatibility and an Ultra HD service to follow “quickly afterwards”.

Sky said that Sky Q will be Ultra HD-ready in advance of the launch of “the UK’s most comprehensive Ultra High Definition service later in 2016” – which will include a range of sports, movies and entertainment content.

Describing Sky’s new offering, Darroch said: “in short, our ambition was to reimagine TV for the way people live their lives today, and the result is Sky Q.”

Other new features of Sky Q include a completely redesigned Sky interface, a Bluetooth-connected touch-screen remote control, and a Sky Q Hub.

The latter is a device that is designed to turn Sky Q boxes into WiFi hotspots and has ‘Powerline networking technology’ that uses in-home electrical wiring as well as WiFi to communicate with Sky Q boxes.

The new Sky Q interface will include a ‘My Q’ section that will let users continue watching shows where they left off – no matter what screen they are using – and get recommendations for programmes based on their tastes.

There is also a new online video section that will give users quick access to YouTube and web content from publishers the likes of Conde Nast Entertainment, GQ, Vanity Fair, Vogue, Wired and GoPro.

Viewers can still use Sky Q to access the Sky Store and on-demand content from broadcasters like the BBC, Channel 4 and ITV, but they will also be able use their new Sky Q box to stream music over Bluetooth or Apple Airplay. A Q Sync feature lets users sync recordings from their box to their tablet to enable offline and out-of-the-home viewing.

Sky said that pricing for the service will be announced closer to launch. Sky Q will join Sky’s existing line of TV products alongside Sky+ and its standalone Now TV streaming service.