Netflix on track for 115m global subscribers by 2020 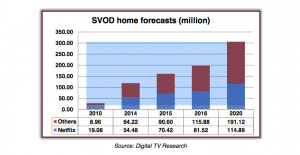 Netflix will have 115 million paying subscribers across a 200-country footprint by 2020, according to new research.

The US-listed streaming service will generate global subs revenue of US$12.2 billion by this point, according to Digital TV Research.

The research firm says that by the end of the year there will be 161 million global SVOD homes, an increase of 42 million year-on-year, and that by 2020 the total will rocket to 306 million.

While Netflix will remain by far the single largest SVOD operator, the overall proportion of SVOD homes it claims will fall from 43% this year to 37.5% by 2020.

Digital TV Research’s projections suggest Netflix will add 44 million subs between 2015 and 2020. The US-based streaming service is in the middle of an aggressive international roll out that will see it launch in 200 territories.

In the US it will add 7 million customers between now and 2020, taking the total to 50.4 million.

Across the whole SVOD market, China will add 22 million SVOD subs in the next five years, the US 22 million, Japan 9 million and India 7 million, making them the notable fast-growing SVOD markets.