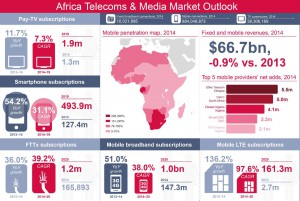 The number of mobile broadband connections in Africa will climb from 147 million last year to reach one billion in 2020, according to Ovum.

The research firm said that the ongoing rollout of 3G W-CDMA and 4G LTE networks and the increasing affordability of smartphones and other data devices will help drive the “rapid growth” of mobile broadband in Africa over the next few years.

“Although the pace of growth in overall connection numbers in Africa has slowed and the regional industry is facing some headwinds from rising competition and weaker economic conditions, there are substantial growth opportunities on the continent in data connectivity as well as in digital services that are based on those data connections,” said Matthew Reed, practice leader for Middle East and Africa at Ovum.

“The South African market is among the most advanced on the continent, so it is to be expected that it leads in potential for digital media services.”

Ovum predicts that Africa’s fixed-broadband market will grow strongly from a low base, as operators on the continent step up wireless and fiber network broadband deployments. The number of FTTH/B subscriptions in Africa will rise from about 166,000 at the end of 2014 to 1.2 million at the end of 2020, forecasts Ovum.