Orange to launch new version of Watch with Twitter internationally 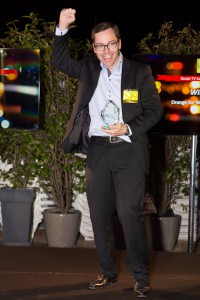 Speaking at the OTTtv World Summit in London this morning, Christophe Rufin, cloud TV and entertainment ecosystems director at Orange, said the group would focus on quality over quantity in bringing new features to its social TV programme. He said that the company had gained valuable feedback from its existing Watch with Twitter service and will launch a new version next year that will also be taken to other territories in which the company is active.

Rufin said that the new version of Watch with Twitter, which enables viewers to choose channels and content based on what is trending on Twitter and also displays Twitter feeds related to particular programmes on the TV screen, will be blended into the live TV service and the EPG rather than requiring people to go into a separate screen on the TV. “This is something we are working on,” he said.

The Watch with Twitter ‘popular programme’ feed will be incorporated closely with the existing EPG to give additional information to that already visible in the EPG, giving users the choice of whether to rely on the EPG information or Twitter to choose what programmes to watch, said Rufin. “For most, the traditional EPG will remain the instrument of choice. But some socially-aware users might like to browse programmes by popularity. Adding the ability to tune in to programmes that are socially popular [feeds] a natural behaviour.”

Addressing the question of broadcaster’ investment in EPG positioning and information, he said that viewers were already using Twitter to choose what to watch, and that by integrating Watch with Twitter with the EPG, Orange will make this easier. “We think it’s better to control this. If we don’t do anything it will happen anyway but outside our service,” he said.

Rufin said that Orange wanted to learn from the French deployment ahead of launching it internationally. Because of language issues it takes some work to localise the service, he said. “ We are working hardto make sure it’s properly adapted to the specifics of each country,” he said.

Rufin said that a key priority is integration of Twitter with the live TV service. He said that shows with live hashtags encourage interaction, and Orange will display calls to action when the programme starts. Rufin said that Orange would also like to integrate Twitter into its own app on second screen devices. “We have a successful Orange TV app. For the moment people can interact through the native Twitter interface, and their own Tweets displayed on the show. We want to add this feature to our own apps, and we are discussing this with Twitter,” he said.

The Watch with Twitter service is currently entirely free, but when Orange reaches scale it will be able to make money from it through advertising, said Rufin. However, he said Orange had yet to have detailed discussion with channels on this.

On whether Twitter can contribute to more TV viewing, Rufin said it is difficult to determine the impact of Twitter on TV by separating this from the impact of TV on Twitter. However, he cited a study undertaken last year that showed, by looking at the impact of Tweets seven days after a show was aired, that an uplift of 10% of Tweets related to a particular show led to an uplift in audience of 1.8% after seven days.

He said that social is seen as a way to discover content through a ‘personal programme guide’ enabled by Watch with Twitter. Adding social media to the content and engaging viewers are two separate activities, said Rufin, and Watch with Twitter is the former type of service, adding content via Twitter in a lean back experience.

Watching TV is still largely passive, and is also a shared experience, said Rufin. Orange has worked with Twitter to make the most of these characteristics, he said, adding that TV being ‘passive’ means focusing on simple interactions and TV being ‘shared’ means no login.

Twitter provided a private API to enable the service. Content that appears on the TV is matched against the live show. Even if users don’t use hashtags associated with the show, the system can learn if Tweets are associated with particular shows by analysing the content on Twitter and matching it with the show being watched, said Rufin.

Orange’s Watch with Twitter service won the award for ‘Social TV Innovation of the Year’ at this year’s inaugural Content Innovation Awards – an event run by DTVE in association with its sister title TBI on the eve of the MIPCOM content market in Cannes.