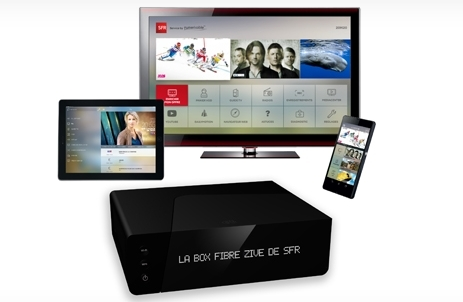 The Zive SVoD offering will be available through the new box and will be exclusive to SFR customers in France. It is due to include 5,000 HD programs and nearly 600 items of content in 4K/UHD.

The all-in-one multimedia home gateway, meanwhile, will run on SFR’s fibre network and include a 1Gbps modem, a 4K/Ultra HD TV decoder and a 500GB hard drive for recording programmes.

La Box Fibre Zive de SFR has multiscreen capabilities, eight tuners, a ‘restart’ function for watching back live programmes.  It also lets users watch a live UHD stream while keeping an eye on another channel using the ‘Picture in Picture’ function, at the same time as recording another two streams.

The device includes NFC and Bluetooth technology, designed to make it easy for users to sync up devices like mobile phones.

Earlier this year rival French operator, Free, launched a new entry-level 4K small form factor set-top box, the Freebox Mini 4K. This was a replacement for its Crystal device, and allowed Free to claim a stake as the first operator globally to launch a 4K box.