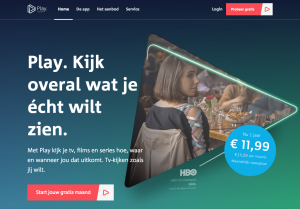 Dutch telco KPN has launched subscription OTT service Play, offering a range of popular live TV channels and on-demand content for €11.99 a month for the first year, without an ongoing contract commitment.

KPN has launched the service, following a closed beta trial with about 2,000 users.

The telco is offering 22 linear TV channels including HBO, along with HBO On Demand. Other channels include Comedy Central, TLC, Nickelodeon, Discovery and adaptive personalised music channel Xite.

Viewers can use the app to schedule recordings, and content can be viewed on the TV via Google’s Chromecast media streaming dongle.

The service is available on iOS and Android devices. And HD option and a browser version for PCs will be added in the future.

The service will be available for free for the first month to users who sign up before the end of the year, and for €11.99 a month for the first year, with the price to rise to €14.99 thereafter.