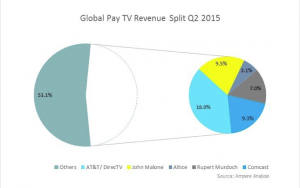 Altice has experienced a “meteoric rise” in the past 18 months, but its current strategy lacks focus, according to new research by Ampere Analysis.

The report claims that, thanks to an aggressive US$50 billion (€45 billion) expansion plan, in the past year and a half Altice has transitioned from a private equity firm with a diverse range of smaller stakes, to a multinational TV and communications company.

However, Ampere research director Guy Bisson said: “Unlike the four largest [global pay TV] players, what’s missing in Altice’s current strategy is a focus – by region or platform.”
Ampere estimates that Altice accounts for 3.1% of global pay TV revenue, pending final approval on its Cablevision acquisition, and is now one of the five largest global pay TV players that collectively control close to 50% of the world’s subscription TV revenue.

He claimed that Altice could opt to merge fixed line cable with internet services and wireless communications in the US – as it did in Europe with Numericable-SFR. However, he said to do this, Altice would need to buy a mobile operator to offer quadplay services and cautioned this would “not be cheap”.

“There is a question mark over how Altice can make such a diverse portfolio work. Like a Monopoly player who buys every property he lands on, regardless of the location, purpose, or price, the longer-term plan for generating growth requires additional attention,” said Ampere.

Alongside the creation of Numericable-SFR in France and the pending US Cablevision deal, Altice’s other recent acquisitions include Portugal Telecom and US cable provider Suddenlink.