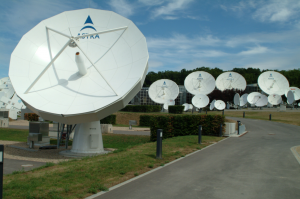 Satellite operator SES’s third quarter revenues and EBITDA were boosted by favourable exchange rates, with revenue up 6.1% to €1.493 billion and EBITDA up 5.4% to €1.106 billion.

Revenue at constant exchange rates was down 2.9%, thanks to lower transponder sales under its agreement with rival Eutelsat and the impact of capacity renewal agreements with EchoStar in the US.

HD TV channels on SES’s satellites grew by 18.6% to 2,178, with HD penetration growing from 28.6% to 30.6% of all channels. SES reported it had six commercial agreements in place for UHD services by the end of the period.

SES has continued to be productive in the third quarter 2015. SES has been first out of the starting gate in the commercial introduction of Ultra HD, building on the milestone of Europe’s first commercial UHD channel, pearl.tv – and adding further agreements in Europe and North America with Sky Deutschland, NASA TV, Fashion One, High 4K and TERN,” said Karim Michel Sabbagh, president and CEO.

“SES has exciting opportunities ahead and is well placed to deliver sustained medium to long-term growth. Our relentless execution of a differentiated strategy allows us to capitalise on the strong demand drivers across the four market verticals now defining SES’s business.”