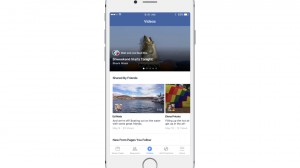 Facebook is focusing its video efforts by trialling a new section designed to help people discover, watch and share videos on the service.

The dedicated video destination marks Facebook’s latest attempt to take on the likes of YouTube and will let viewers watch videos from friends, pages they follow and other video publishers on Facebook.

The new section will also give access to ‘saved videos’ – another new feature that Facebook is testing that lets users click a save button to watch videos later.

Facebook said it is initially testing the feature with “a small number of people” and that it will be accessible via a ‘Videos’ icon at the bottom of the Facebook app on iPhone or in the ‘Favorites’ section on the left-hand side of News Feed on the web.

The introduction of a video section on Facebook follows a recent suggested video trial for iPhone users, designed to make it easy for users to discover multiple related videos in a row after tapping a video from the News Feed.

“While we’re still in the early days of testing, we’re pleased with initial results, which show that people who have suggested videos are discovering and watching more new videos,” said Facebook vice-president of product management, Will Cathcart.

“We’ve now rolled out suggested videos to most people on iPhone globally, and are starting to test ads within the experience. We are also starting to test this on the web, and plan to test on Android phones in the coming months.”

In an update about new video experiences on Facebook, the social network said it has also been working on a number of features to help publishers to better manage and control their videos on the site.

“We recently began testing new video matching technology with a set of partners, with the long-term goal of providing a comprehensive video management system for creators,” said Cathcart.

Other recent video developments at Facebook include the rollout of 360-degree immersive video support in September. A month earlier, the company announced that public figures on the site can share live video with their fans on the site – a feature that has been used by celebrities like actor Vin Diesel and tennis player Serena Williams.

In September 2014 Facebook said that for months it had been averaging more than 1 billion video views on the service each day. Cathcart said that since then video “has continued to grow on Facebook” and has become “an integral part of how people around the world discover, watch and share videos they care about every day”.

This summer, a report by research firm Ampere Analysis said that Facebook is making a “serious play” for content owners and looks poised to take on YouTube’s dominance in video. It said that video views are “rocketing” and trials with content owners like NFL and Fox Sports “suggest it’s primed to become a plausible alternative to YouTube.”