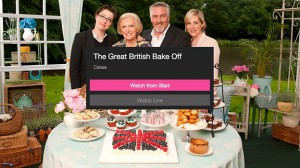 The Great British Bake Off helped boost the performance of BBC iPlayer in August, with the BBC’s catch-up and on-demand service recording 278 million requests overall for August, including 226 million TV requests, up 11% on July and up 24% year-on-year for August.

Overall, including radio request, iPlayer saw a 14% jump in requests year-on-year for the month. Requests were up 8% month-on-month.

Episodes one to four of The Great British Bake Off were the most-watched episodes in August, delivering over 1.5 million requests each and a total of 7.3 million across all four episodes. Soap opera EastEnders was next, followed by shows including new dramas The Scandalous Lady W, Partners in Crime and Ripper Street.

For the first time the iPlayer statistics for the month included content that is exclusive to iPlayer.

The BBC said that the profile of users had evened out over time in terms of male/female ratio, but remains strongly under-55 in terms of age.

In terms of devices used to view iPlayer content, connected TV devices saw a jump in August, rising from 5% in July to 7% in August. This number includes streaming devices and smart TVs but excludes TV platform operator set-top boxes.

For TV requests, connected devices accounted for 6% of requests, up from 4% in July, with all TV viewing including set-tops and game consoles accounting for 24% of iPlayer TV requests.