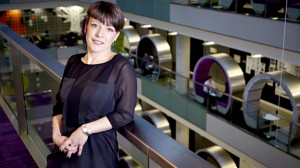 The BBC plans to launch a dedicated children’s version of the iPlayer next year and has also unveiled further details of its proposed iPlay kids digital service.

Speaking in Salford on Friday, director of BBC Children’s, Alice Webb, said that the new children’s iPlayer service will be a standalone app that provides a “safe environment” for children seeking to find their favourite CBBC and CBeebies content.

iPlayer will have the “same importance” as the BBC’s two linear TV channels, and shows will also be premiered on the service, she said. The Children’s iPlayer is due to launch as an app for Android and iOS mobiles and tablets.

Delivering a speech entitled ‘Our Big Digital Plan For Children: BBC Children’s Vision for the Future’, Webb also outlined plans for iPlay, a new digital service that will act as “a single, online front-door for children to the wealth of the whole BBC and trusted partners beyond” and is slated to launch further into the future.

Still under a working title, iPlay will be an on-demand partner to the BBC’s linear TV channels, CBBC and CBeebies, but will offer “much more besides” – such as interactive formats and games, and child-appropriate content from elsewhere on the BBC, said Webb.

“It will give each child a personal menu of their favourite content, from across the BBC – like Great British Bake Off, Match of the Day, BBC Bitesize, Radio 1, Big Blue Live as well as children’s specific content like Blue Peter and Bing,” said Webb.

“Free from commercial influence, it would include the programmes children love but would also allow us to commission new types of content, whether interactive formats, film or audio clips, games or digital creative activity.”

Over time, iPlay will also connect to other trusted organisations like the RSPB, Natural History Museum and Sport England.

Webb added that iPlay will allow kids to interact with others and explore and express creativity “in ways that the audience of 10 years ago could never have imagined”.

She said learning will be a core part of iPlay and that the service will encourage children to be “active creators, not just passive consumers”.

In the first six months of the year, the BBC claims 500 million downloads of children’s content on iPlayer – almost double the number in the same period last year. The BBC also claims that over 50% of kids use mobiles and tablets and that 25% of kids already come to CBBC via BBC iPlayer.

The proposed iPlay service was first announced by BBC director general, Tony Hall, earlier this month when he outlined his plans for an “open BBC for the internet age”.