Netflix, Hulu and others to launch on Gear VR headset 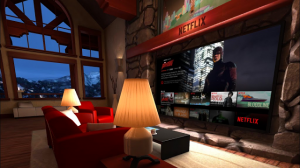 Netflix and Hulu are among the major content partners that will launch apps for the forthcoming Samsung and Oculus-developed virtual reality headset, Gear VR.

At the Oculus Connect conference in Hollywood, Oculus announced that it was bringing Netflix, Hulu, Twitch and Vimeo to the Gear VR, with TiVo, Facebook, 20th Century Fox and Lionsgate also named as partners.

At the same time, Samsung said that the Gear VR, the first consumer version of its earlier Gear VR developments, would be available from this autumn priced at US$99.

Unveiling details of its Gear VR app, which will be available from launch, Netflix said this includes a “Netflix Living Room” that will let users experience Netflix “from the comfort of a virtual couch”.

To bring its TV user interface to the Gear VR headset, Netflix worked closely with Oculus chief technology officer, John Carmack, who said “a lot of people want to watch movies and shows in virtual reality”.

“A year ago, I had a short list of the top things that I felt Gear VR needed to be successful. One of them was Netflix. It was very rewarding to be able to do this work right before Oculus Connect and make it available to all of our users in such a short timeframe. Plus, I got to watch the entire season of Daredevil from the comfort of my virtual couch,” said Carmack. 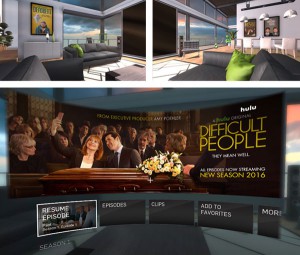 Similarly, Hulu announced details of its Hulu VR application that will feature “immersive 3D environments” and allow subscribers to stream Hulu’s 2D library of content as well as original virtual reality short-form content – starting with a VR short film from the creators of Hulu Original RocketJump: The Show, produced by Lionsgate and RocketJump.

Hulu said that the range of experiences on offer will include  “a comfortable living room setting” and a “classic movie theatre setting”, with Seinfeld fans able “to be transported on to the blue couch in Jerry’s iconic apartment to watch favourite episodes of the series.”

“Hulu lives at the intersection of technology and entertainment, and this is a great example. Providing viewers with dynamic environments of their choice and themed around their favourite shows provides a whole new level of engagement, which together with our cinematic VR experiences makes Hulu an exciting VR destination,” said Julian Eggebrecht, Hulu vice-president of device platforms.

At the Oculus Connect event, Oculus said its partnership with videogame-focused video destination, Twitch, would also see it bring live streaming to the Gear VR.

Samsung said the “new and refined” Gear VR headset will come with hundreds of new content options and will be compatible with smartphones including the Galaxy Note 5, Galaxy S6 edge+, and the S6.

It added that the device will be 22% lighter than Samsung’s previous Gear VR Innovator Edition, will be more comfortable, and that the device’s touchpad has been improved to give more control while users enjoy the selection of film, gaming, 360 degree video and experiential content available for Gear VR.

“Together with Samsung, we’ve redefined virtual reality and created the best mobile VR experience available today. On Gear VR, people are playing immersive VR games with friends, sharing 360 video experiences, and teleporting around the world with photos and videos – and it’s only the beginning for what’s possible with mobile VR,” said Oculus CEO, Brendan Iribe.