Broadband still failing to reach over half world’s population 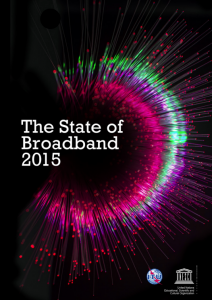 Almost three in five of the world’s people remain offline even as broadband penetration reaches saturation in richer countries, according to the latest survey by the UN Broadband Commission.

According to the 2015 edition of the State of Broadband report, 57% of the world’s people remain offline and unable to take advantage of the enormous economic and social benefits the Internet can offer.

According to the report, 3.2 billion people are now connected, up from 2.9 billion last year and equal to 43% of the global population. But while access to the internet is approaching saturation in the developed world, the internet is only accessible to 35% of people in developing countries. In the world’s 48 least-developed countries over 90% of people have no connectivity at all to the web.

The top 10 countries for household penetration are in Asia or the Middle East, with Korea leading the eay with 98.5% of homes connected. Qatar and Saudi Arabia are second and third with 98% and 94% penetration respectively.

Iceland has the highest percentage of individuals using the Internet, with 98.2%, just ahead of Norway with 96.3% and Denmark with 96%.

European countries lead in fixed broadband, with fixed broadband in Monaco, Switzerland, Denmark, Netherlands, Liechtenstein and France now subscribed to by over 40% of the population.

“The UN Sustainable Development Goals remind us that we need to measure global development by the number of those being left behind,” said ITU Secretary-General Houlin Zhao, who serves as co-vice-chair of the UN’s Broadband Commission with UNESCO director-general Irina Bokova. “The market has done its work connecting the world’s wealthier nations, where a strong business case for network roll-out can easily be made. Our important challenge now is to find ways of getting online the four billion people who still lack the benefits of Internet connectivity, and this will be a primary focus of the Broadband Commission going forward.”