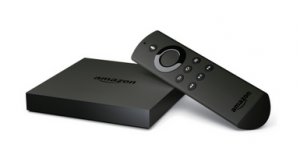 The device is available for pre-order for US$99.99 (€88) in the US and will start shipping on October 5, providing access to TV shows on-demand and live services from the likes of Netflix, Amazon Prime Instant Video, HBO Now, Hulu, WatchESPN, Showtime Anytime, Sling TV, Starz Play, Vevo, YouTube and many other services.

According to Amazon, the new Fire TV will provide access to more 4K Ultra HD movies than any other streaming media player, with 4K content from Netflix, Amazon Video, and Prime Video. Already available in 4K are shows and movies from Amazon Video includingTransparent, Better Call Saul, American Hustle, and Amazing Spiderman 2, as well as shows and movies such as Narcos and Marvel’s Daredevils from Netflix.

The device supports the new HEVC video compression technology, meaning that in addition to 4K content it will also be able to deliver more HD content to users. According to Amazon, the device features 75% more processing power than the pervious version, five times the processing power of Roku and eight times that of Chromecast. The device includes a MediaTek 64-bit quad-core processor, a dedicated GPU and additional memory. It also features 802.11ac MIMO WiFi and the 8GB storage capacity of the device can be extended via a microSD card slot for up to 128GB of additional downloaded apps and games. Other features include support for Dolby Audio, including virtual surround sound via Bluetooth headphone support.

Amazon has also launched a new Fire TV Stick, the HDMI dongle version of the platform, for US$49.99, with the addition of a voice-controlled remote via Amazon’s Alexa voice-recognition software. According to Amazon, the stick has four times the storage and two times the memory of Chromecast, a ual-core processor, 1GB of RAM, Dolby Audio and the ability to connect to any password-protected WiFi network without the need for additional software.

“The team has packed an incredible amount of technology and innovation into a tiny package,” said Jeff Bezos, Amazon.com founder and CEO. “The new Fire TV includes 4K support, more processing power, Alexa integration, the largest selection, and exclusive features – for less than US$100. The new Fire TV Stick with Voice Remote brings voice search and Alexa integration for less than US$50. These are powerful devices at incredible prices.”

Amazon has separately launched a new low-cost Fire tablet retailing in the US at US$49.99. The device includes a quad-core processor, 7” IPS display, front- and rear-facing cameras, and up to 128GB of expandable storage.