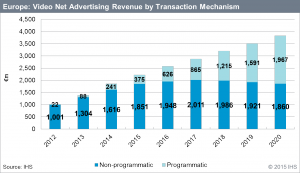 European online programmatic video revenues jumped from €22 million in 2012 to €375 million in 2015, according to research by IHS and SpotX, and programmatic advertising is expected to account for over 50% of the online video total by 2020.