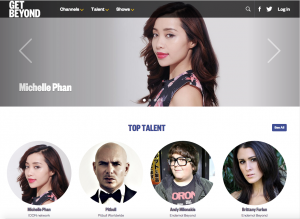 Endemol Beyond USA, part of the Endemol Shine Group, has partnered with TV tech firm Piksel to create its owned-and-operated platform, GetBeyond.US.

UK-based Barcroft has also launched its own free-to-watch platform, Barcroft.TV, which will focus on ‘the amazing side of life’.

Endemol Beyond USA and Barcroft are both known for their YouTube channels, which create original programming that has been delivering millions of views each month and creating profitable digital content businesses.

The first will be There’s a Polar Bear in My Pool!, which debuts today. A short-form clip based on the doc already has 37 million views on Barcroft’s YouTube channel. 1-800-AUTOPSY will follow, looking inside a leading American private post-mortem company, with Landing Sharks, about a group of Floridian shark fishers, coming after that.

For Endemol Beyond USA, which sits within Endemol Shine North America and is also part of a wider Endemol Beyond group, the move comes soon after it installed Adrian Sexton as interim president and COO following the exit of Will Keenan.

“On top of our wide distribution and reach across YouTube, Facebook and other partners, Piksel helps drive our business forward from a unified platform while also syndicating our content,” said Sexton.

“With the roll-out of our premium networks – Icon and upcoming Smasher and Looksy networks – GetBeyond.US streamlines our consumer experience with strong branding, promotion and distribution.”

Endemol Beyond claims to deliver more than 1.8 billion monthly YouTube views across its premium online channels portfolio, while Barcroft TV was the first Britain-based YouTube channel to reach one million YouTube subscribers.

The net currently averages more than 100 million views per month across all platforms, which forms a significant revenue-driving segment for Barcroft Media, which is best known as an unscripted producer for linear TV channels.

“Whist our focus remains on delivering brilliant shows for broadcasters, the time is now right to exploit our brand using our own platform. On Barcroft.TV we’ll premiere our documentaries as well as showcasing amazing content from our partners,” said Barcroft Media CEO Sam Barcroft.

“Our ultimate goal is to become the digital home of popular factual content. We believe future content business models will move from a purely traditional network-commissioning model to a multiplatform licensing model. Producers can and should be thinking like channels now, building their own audiences with an eye on the future, and developing their own consumer brands”.