UK broadcast TV viewing has been falling since 2012, says Ofcom 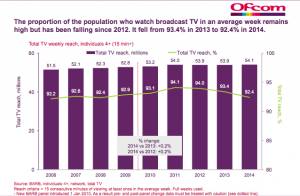 The proportion of the UK population who watch broadcast TV on an average week remains high, but has been falling since 2012, according to broadcast regulator Ofcom.

Average daily viewing times for broadcast TV also fell by 11 minutes from 232 minutes per person in 2013 to 220 minutes per day in 2014 – with a one-minute rise in time-shifted viewing unable to offset the loss.

“The 2013-2014 decline in daily viewing was across all age groups, with a distinct split between the under- and over-45s compared to the average. The reduction varied from 17 minutes a day among children to one minute per day among viewers aged 65 or over,” said Ofcom.

“Taking a longer-term view over ten years, the change in viewing levels varies significantly by age group. The largest falls have been among under-45s, particularly 25-34 year olds.”

The report said that average daily minutes of television viewing fell across all channel groups between 2013 and 2014, with more than 40% (5 minutes) of the total fall in daily viewing attributed to ITV and its portfolio of channels.

At the same time, Ofcom noted that people are increasingly relying on their phones for a number of activities and services, including entertainment. Half of smartphone users admitted to being “hooked” on their handsets, rising to 61% of young people, while 50% of 18-24 year-olds said they check their phone within five minutes of waking up.