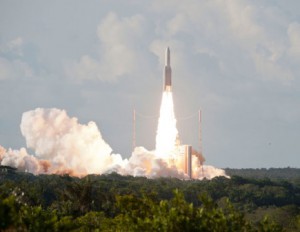 New satellites from Eutelsat and Intelsat have both launched into orbit on an Ariane 5 rocket from Kourou, French Guiana.

The Eutelsat 8 West B and Intelsat 34 satellites blasted off yesterday at 17.34 local team and each successfully separated from the rocket after launch.

Eutelsat said that the solar panels on its new satellite have been partially deployed and that the motor will be fired in the coming five days so that it can complete its climb to geostationary orbit.

Eutelsat 8 West B will transfer to 7/8° West where it will enter full commercial service in early October, after a full series of performance tests.

The satellite hosts Ku-band and C-band payloads and will cover more than 52 TV homes in the Middle East and North Africa, according to Eutelsat.

Intelsat 34 is due to be placed into service at the 304.5ºE orbital location and is also a C- and Ku-band satellite. It will host a Ku-band DTH television platform as well as a specialised Ku-band payload serving broadband services for the aeronautical and maritime mobility sector in the North Atlantic.

The new satellite will replace Intelsat 805 and Galaxy 11 as the third in Intelsat’s Latin America, pan-regional video distribution neighbourhood – which includes Intelsat 11 and Intelsat 21.

Eutelsat’s deputy CEO and chief commercial and development officer, Michel Azibert, said: Eutelsat 8 West B equips us to meet demand to broadcast more digital and High Definition content to over 250 million viewers and gives us more coverage options, enabling broadcasters to target their audience. These features underpin the 100% success in sales of capacity connected to footprints serving a vast region stretching from Morocco to the Gulf.”