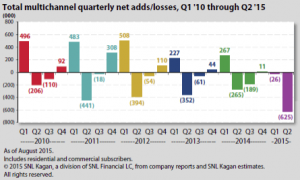 US multi-channel service providers lost more than 600,000 video subscribers in the three months ended June 30, according to SNL Kagan.

The research firm said that combined residential and commercial subscribers  for US cable, satellite and telco platforms fell to 100.4 million at the end of the second quarter, following an “uncharacteristically weak first quarter.”

According to the report, there is likely to be a “much larger decline for full-year 2015 than the industry produced between 2010 and 2014, during what could essentially be seen as a period of general malaise.”

“Cable’s basic-subscriber losses, at 350,000, came in at their lowest level since 2008, when the segment shed 211,000 basic video customers in the seasonally weak period,” according to SNL.

The satellite segment lost an estimated 304,000 subscribers in Q2, as DirecTV and DISH Network both reported record declines.

“The inconclusive movement in US multichannel subscriptions took a more decisive direction in the second quarter, producing the largest loss to date amid growing fears of cord cutting,” said SNL.