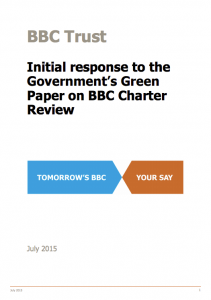 The BBC Trust has called for greater protection for the public broadcaster from politics, changes to the BBC Charter and legal guarantees that the BBC licence fee cannot be amended before consultation with the public.

The Trust, which currently governs the activities of the BBC, was officially responding to the Green Paper issued last week. That document outlined the options the government will consider for the future of the BBC including a subscription fee, spinning off BBC Worldwide and scaling back the BBC’s programming remit, specifically in the entertainment genre.

In its initial response the Trust demanded the introduction of “clear boundaries around the Government’s involvement in the BBC in future”. That call was made in the wake of a licence fee deal thrashed out between BBC management and the UK government with no involvement from the Trust or any form of public consultation.

The Trust’s other main proposals included extending the length of the BBC Charter to eleven years so that its renewal is not insync with UK general elections. It also wants a requirement that the public is consulted over BBC funding enshrined in law.

BBC Trust Chairman Rona Fairhead said: “Charter Review will ultimately decide what kind of programmes and services audiences get for the BBC they pay for, so the most important voice in the debate is that of the public and we’ll ensure it is heard.

“We welcome the Government’s recognition of the importance of the BBC and the value that it brings – that value is built on its providing something for everyone and its independence, which we know audiences support.”

The Trust has launched its own public consultation and will incorporate those results in its next response to the Green Paper. The consultation takes the form of an online survey containing 16 questions about the BBC including whether the BBC should operate across different digital platforms, its programming remit and whether the Corporation is succeeding in representing all viewers in the UK.