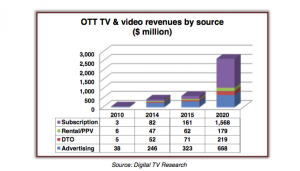 Over-the-top television and video revenues in eastern Europe, the Middle East and Africa will reach US$2.64 billion (€2.43 billion) in revenues in the six years to 2020, new analysis suggests.

Put into content, the ‘EEMEA’ region the report describes took just US$52 million in revenues in 2010 and 2015 is expected to pull in US$616 million.

With the US$2.21 billion figure, Russia will be the biggest contributor by some distance, with around US$795 million. Turkey will be the next biggest with a US$219 million contribution.

“OTT in Eastern Europe, Middle East & Africa will still be an immature sector by 2020, although this is an improvement on the very immature status by end-2014 and its nearly non-existent status in 2010,” said Digital TV Research principal analyst Simon Murray.

SVOD is to become the region’s largest OTT revenue source in 2017, at which point Netflix is expected to have wide distribution locally. SVOD revenues will total US$1.57 billion by 2020 – 60% of all OTT revenues – up from a tiny US$3 million just a decade before.

Overall by 2020, 12.3%of the region’s TV households will subscriber to an SVOD package, though penetration will vary considerably from 30% in Israel to 1.5% in Egypt, Digital TV Research claims.