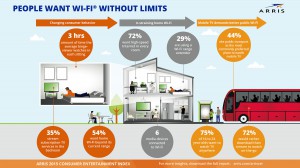 The average household now spends almost 6.5 hours each week streaming subscription content, though 63% of global consumers have issues with WiFi at home, according to Arris.

The technology provider and set-top box maker’s 2015 Consumer Entertainment Index (CEI) report claims that there is a “growing disparity between expectation and reality when it comes to WiFi at home” – with the growing number of connected media devices cited as a likely reason for this.

Some 72% of consumers claimed a high-speed internet connection in every room of their house is now either ”vitally important” or “very important,” and found that 81% of those who stream content now doing so at least weekly – up from 72% last year.

Some 59% of consumers said they now watch mobile TV. Of those who watch content on-the-go at least once a week, 73% said they opt to stream over WiFi.

Elsewhere the study claimed that there has been a “nominal increase” in OTT users over the past year – from 93% to 94% – and a similarly nominal decrease in broadcast TV users – from 97% to 96%.

Arris’ senior vice-president of global marketing, Sandy Howe said that the research highlights four major trends: consumer dependence on WiFi and frustration with its quality; the concurrent growth and hindrance of mobile TV adoption; the growing preference for downloading compared to streaming mobile content; and the increasingly personal nature of binge-viewing.

“All of these trends point to a tremendous opportunity for service providers and programmers to customise their offerings to these new consumer trends and to ensure the quality of the home’s WiFi network, which increasingly is bearing the weight of this evolution in services,” said Howe.

Arris’ Consumer Entertainment Index surveyed 19,000 consumers from 19 countries for a representative sample of how entertainment is evolving all over the world.