SVoD homes in Asia Pacific to quadruple by 2020 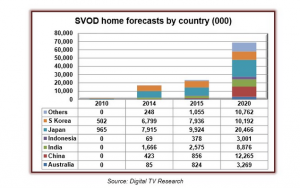 The number of homes in the Asia Pacific region using subscription video-on-demand (SVoD) services is due to quadruple from 17.21 million in 2014 to 68.83 million in 2020, according to new research.

“SVoD will become the region’s largest OTT revenue source in 2018. SVoD revenues will increase from US$1.032 billion in 2014 and to US$4.763 billion in 2020. Japan will remain the SVOD revenue leader by some distance, with second-placed South Korea generating less than half its revenues by 2020,” according to the report.