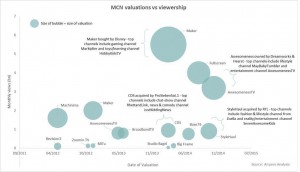 The top 100 YouTube multichannel networks (MCNs) are worth nearly US$10 billion, with the YouTube channel business in total now valued at over $20 billion, according to Ampere Analysis.

The new research claims that 42% of all YouTube’s video views in the first quarter of the year were on the top 100 MCNs, with these networks notching up 100 billion views per month.

According to Ampere estimates, a typical MCN with 1 billion views per month would be valued at US$97 million and make approximately US$21 million in gross revenue per year – with the MCN business offering a good return on investment for media businesses despite high pricetags.

“They are also an extremely effective way for traditional media players to reach a younger audience which is leaving traditional media in droves, as well as to experiment with new programme formats and content types.”

Ampere claims that there are now 22 MCNs worldwide that would command a purchase price of at least $100 million – but that “very few top MCNs” do not already now have an affiliation to a major media group.

Ampere’s research says that typical MCN valuations represent a multiple of between 25-times and 35-times their annual revenues – many times higher than a mature broadcasting business – though still a good opportunity for investors.

“Growth rates for MCNs are huge, and early buyers into the sector have seen their acquisitions triple in value within a few short years. Furthermore, buying an MCN delivers instant global reach, opening up new territories and helping to future-proof businesses in an increasingly unpredictable media sector,” said Broughton.

Ampere claims that deals like Discovery’s buyout of Revision3 and Disney’s takeover of Maker studios represent an MCN “land grab” by traditional media that is now “all but over.”

It estimates that both Dreamworks and Disney have seen the investments they made in MCNs increase in value by more than 240% in just 18 months.

“For those players without a stake in the MCN game, sand is rapidly running through the hourglass,” said Broughton.

“With no apparent decline in valuations over time, those rare MCNs that are still independent are becoming increasingly expensive. Many media companies are playing a waiting game: the million dollar question now is when to stop waiting and start acting.”