Almost half of binge viewers to give up on unavailable shows 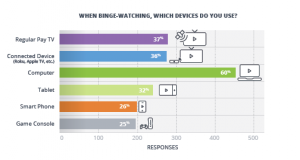 Nearly half of binge viewers will look for something else to watch and may abandon a show completely if the next episode of a series is not available to view, according to new research.

The binge viewing study, by video optimization firm Conviva, claims that only 22% of respondents would wait for an episode to become available if it is impossible to find, or delivered within a sub-par playback experience in the first instance.

The report added that “more than half of the respondents are less than fully committed to return to a series once they stop watching for any reason.”

The report, titled ‘Binge Watching: The New Currency of Video Economics,’ also found that the majority of respondents use a laptop or computer when binge-viewing show – with more viewing this way than on regular pay TV or on connected devices, tablets, smartphones or games consoles.