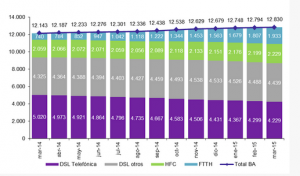 Fixed broadband lines in Spain reached a total 12.83 million at the end of the first quarter, up 5.7% year-on-year, according to regulator the CNMC.

According to the regulator, fibre led the growth, adding more than 100,000 lines each month for seven consecutive months to take its total to 1.933 million. March saw the addition of 126,485 new FTTH lines.

Telefónica remains the market leader with a 45.1% share, followed by Orange with 15.7%, Ono with 13%, Jazztel with 12.3% and Vodafone with 8.9%. With Orange and Jazztel, and Vodafone and Ono respectively combined, 95% of the market is controlled by these three groups.