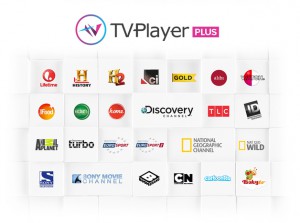 TVPlayer Plus will offer upwards of 25 premium channels and roughly 100 hours of catch-up content a week for £4.99 per month – with no fixed contract.

The Plus option will broaden TVPlayer’s basic offering of more than 55 free-to-air channels and the firm claims it is the first major OTT platform in the UK to combine an ad-supported basic pack with optional pay packs.

“TVPlayer has seen significant success to date with over half a million people now watching TV over-the-top each week on our service,” said  Adam Smith, founder and CEO of Simplestream, the company that launched TVPlayer last year.

“Similar to what Netflix has done for movies and Spotify for music, TVPlayer Plus aims to offer a simplified viewing experience of traditional and premium television content; one which works with the devices you already have and lets you pause, modify or cancel your subscription whenever you like.”

TVPlayer is available to watch on iOS, Android and Amazon Fire TV devices, as well as Macs and PCs. Additional devices available at the launch of TVPlayer Plus will include selected smart TVs, the Amazon Fire TV Stick and Google Chromecast, with more internet-connected devices to be added later in the year.