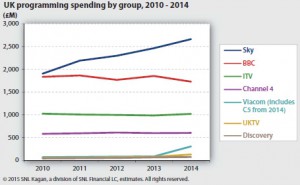 The pay TV channel business in Europe is continuing to grow in revenue terms in key markets, leading to increased interest in the European market from US programmers facing a slowing ad market and rising programming costs, according to analysis by SNL Kagan.

The research group estimated that cable channel revenues in the UK grew at compound annual growth rate of 3.1% over the last four years to reach US$5.6 billion (€5 billion), while programming costs fell at a CAGR of 0.8% to US$3 million and cash-flow increased at a CAGR of 11.4% to US$1.6 billion, with margins expanding from 29.4% to 30.5%.

Germany, traditionally seen as an underdeveloped pay TV market, saw revenues rise at a CAGR of 4.5% over the same poeriod to US$5.9 billion, with programming costs growing by a marginal 0.1% CAGR to US$3.1 billion. Cash flow grew at an impressive 16.4% CAGR to US$1.7 billion and margins expanded from 26.4% to 29.8% over the same period. 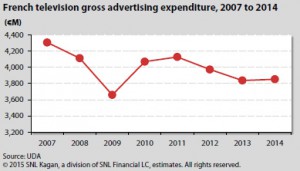 In France, revenues increased at a lower rate of 0.9% over the four-year period to US$2.9 billion, with programming costs rising signifincantly at a CAGR of 6.8% to US$2 billion. Excluding beIN Sports’ substantial startup costs, cash flow declined at a CAGR of 1.5% to US$406.3 million and margins contracted from 18.7% to 15% over the same period.

Despite the growth in markets including the UK and Germany, the business is likely to come under increasing pressure from a similarly soft advertising market and upward pressure on programming costs, as in the US, according to SNL Kagan. This is likely to lead to more intensified carriage deal battles between programmers and operators, according to the research group. According to SNL Kagan, this is one of the key factors behind growing M&A activity in Europe.