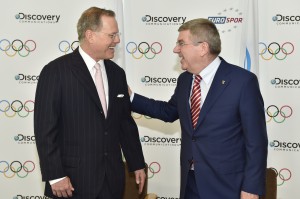 The International Olympic Committee has awarded all TV and multiplatform broadcasting rights across Europe to Discovery Communications for the 2018-24 period in a €1.3 billion deal, the first time a single company has been awarded all rights on an exclusive basis.

“This is an exciting day for the IOC,” said Thomas Bach, president of the IOC on a press call on the announcement. “We think this is a perfect match for two world leaders in their respective fields. It is also a first that reflects the leadership of Discovery. It is the first time a single media company has acquired all the rights across Europe.”

He said the deal covered all platforms, making Discovery the “real gatekeeper” for the games. He said that the IOC was looking forward to “a new era in Olympic television in Europe” and the “real passion for the Olympic Games” shown by Discovery and Eurosport meant that the decision to reach an agreement had been “pretty easy”.

In the UK and France, where rights for the 2018 Olympics and 2020 Winter Games have already been awarded to the BBC and France Télévisions respectively, Discovery will have rights from 2022. Discovery did not submit a bid to secure the rights to the Games in Russia.

Bach said that the tender provides for 200 hours of free-to-air  coverage of each edition of the summer games and 100 of the Winter games as required by the IOC Charter and “there was no question Discovery would respect these conditions of the tender”.

Bach said that the deal carried “great opportunities” and would extend the reach and depth of Olympic coverage.

He said the IOC was sure the deal would mean the Olympics would reach more people across Europe than ever before. Discovery has agreed that free-to-air coverage will be ensured in “a very extensive way for all the territories concerned”, he said.

Bach said public broadcasters such as the BBC had played a “significant role” in developing the Games but noted that Eurosport had also contributed. He added that as the BBC still has the rights to the games in 2020, it has time to discuss cooperation with Discovery.

“Discovery is open to speak with other broadcasters who want to be part of Olympic broadcasting and we are looking forwards to these negotiations. But with this agreement we are very confident we can reach our goals,” he said.

He said that the agreement would enable the Games to address younger people in particular on platforms that they use directly.

“With an agreement like this we are ensuring the financial stability of the IOC and also ensuring that we can distribute US$3.25 million a day to the athletes of the world,” said Bach. “On the other hand longer terms deals also give our partners a better return on investment in that they can benefit from such deals over a decade from now and over four editions of the Olympic Games.”

Discovery president and CEO David Zaslav said that the agreement meant that “the biggest global event” in the sporting world was now part of the Discovery family. “This is a historic partnership. It is an exclusive TV and multiplatform agreement covering all screens in all markets,” he said, adding that Discovery could reach 700 million people across Europe and that the deal would “bring the games to more viewers on more screens than ever before”.

Zaslav said that securing the Olympics was a “game changer” for Discovery Eurosport which he said could “super-serve viewers with coverage of the [Olympic] athletes” through extensive coverage of the build-up to the games, competitions featuring Olympic athletes and programmes about athletes’ back stories. He said Discovery would make content available on Eurosport Player and eurosport.com.

He said that discovery also had a great opportunity to build the IOC’s Olympic Channel in partnership, thanks to the depth of its online coverage of sports.

Zaslav said Discovery would sub-license rights in a number of markets and would also make content available on its own free-to-air channels as well as on pay TV.

“We will be very active in sub-licensing rights,” he said. Zaslav said free-to-air broadcasting would have “as much [coverage of the Games] as in the past” and that content offered on pay TV would be additive. He said that D had “great respect” for the way the Olympics had been broadcast in the past.

“We expect it will be sub-distributed in many markets and…much of the rights till go to a free-to-air player with some going to pay TV,” he said.

In addition to the threshold on free-to-air coverage set by the IOC, Discovery will respect the listed events legislation in each country it holds the rights for.

Discovery International Networks president JB Perrette said on the call that 3,500 hours of live event coverage was available for each Games, a total that is “hard to digest” for most individual broadcasters. “We want to make the maximum content available on all platforms,” he said How this is done is “a conversation that is just beginning today” he said. “There is no definitive answer but we will engage in those conversations.”

Zaslav said that acquiring the rights through to 2024 was attractive because Discvoery could build “asset value around the Olympics” and develop strategic relationships to distribute the content. The €1.3 billion price will be “phased in over time”, he said, adding that he expected Discovery’s hold on the Olympics to be cash-flow positive over the course of the deal.