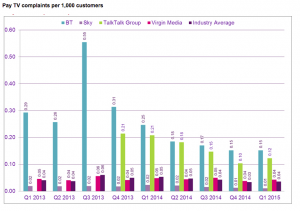 BT continued to generate the highest volume of complaints about pay TV services to UK regulator Ofcom in the first quarter of this year, with 0.15 complaints per 1,000 customers.

TalkTalk generated the second highest volume of complaints, with 0.12 per 1,000, an increase since the fourth quarter of last year.

Cable operator Virgin Media generated an average number of complaints for the industry, with 0.04 per 1,000, while Sky imporved its performance to as few as 0.01 complaints per 1,000 customers.

BT, Plusnet and TalkTalk generated above average levels of complaits for the period, while Virgin Media generated a small but growing number of complaints at 0.06 per 1,000. Sky delivered the best performance, with 0.05 complaints per 1,000 customers.